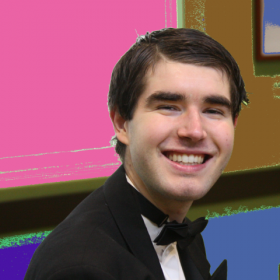 With all the shootings, it almost seems as if we can only guess whether we will see our friends and family tomorrow. In mid-November 2022 alone, there were three mass shootings, two of them at stores while shoppers prepared for Thanksgiving and Black Friday. For many families, there relatives and friends went to a safe place for drinks and shopping, only to find out they never got to see them again. How tragic that innocent lives visiting safe places are the victims of crime. This piece will be in minor, mostly diatonic, and hover around a few chords. Much of it will be a big build on 1-2 chords, creating high anticipations, only for the audience to be left with an inconclusive ending. The audience is left to decide: What is MY job to help fix this?

The lyrics are not entirely set in stone, but will utilize two movements from the Requiem Mass, as well as poems by victims of these hate crimes, whoever is willing to share pro bono or for a nominal fee.

Ian Evans Guthrie, an emerging composer, performer, researcher, and collaborator, has received 1st prize for the Mile High Freedom Band, Noosa-ISAM, and Arcady Composition competitions, 2nd prize for the American Prize, a nomination for a 2020 award from the American Academy of Arts and Letters, and other accolades for his compositions. Many of his works have been performed publicly around the world by fEARnoMUSIC, the Northwest Symphony Orchestra, Moore Philharmonic Orchestra, VIPA, highSCORE Music Festival, Atlantic Music Festival, Charlotte New Music Festival, and others. He has served on various committees, including the Society of Composers, Inc., where he served as the Region VI Student Representative from 2015 to 2017 before serving as Assistant Marketer (2018-20) and Marketer (since February 2020). His most recent works include choral works for many ensembles around Kansas City.
Copyright © 2023 - Consortio, Inc. - St. Paul, MN