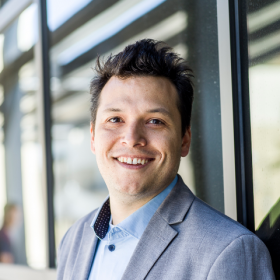 This Breathless Earth will be for unaccompanied SATB choir (with divisi) at a moderate difficulty level comparable to that which a college choir could easily perform. The first half will unpack the imagery of the text through rich polyphony and a darker harmonic language. The music will explore the percussive quality of the consonants mixed with frantic, gasping melodic fragments. It may contain brief aleatoric elements to highlight the confusion and frantic quality of the first lines from the biblical book of St. John 20:19. The second half will voice the hope of new beginnings by a burst of voices breaking away from the dark textures of the first half with longer melodic lines, confident simpler harmonies, and homophony. The final lines will feature a short solo over a recurring chord progression emphasizing the words, “To bring /// this breathless earth /// a breath of heaven.” This passacaglia-like chord progression will slowly lose its pitch and will be replaced with the sound of peaceful unison "breathing" - a fitting counterpart to the agitated opening. This two-part approach will offer a dramatic arc that begins with a somewhat frenetic, fearful opening, and a lush peaceful conclusion.

We bolted every door but even so
We couldn’t catch our breath for very fear:
Fear of their knocking at the gate below,
Fear that they’d find and kill us even here.
Though Mary’s tale had quickened all our hearts
Each fleeting hope just deepens your despair:
The panic grips again, the gasping starts,
The drowning, and the coming up for air.

Then suddenly, a different atmosphere,
A clarity of light, a strange release,
And, all unlooked for, Christ himself was there
Love in his eyes and on his lips, our peace.
So now we breathe again, sent forth, forgiven,
To bring this breathless earth a breath of heaven.

A word about the text from the poet,

“In this sonnet I use a moment of transition from fear to hope in John’s gospel (Chapter 20) to echo, express and give some foundation to a similar transition for which we are looking in our own time and especially in this crisis. My aim was to phrase the poem in such a way that it could have been spoken by the original disciples in their crisis but can also be spoken by us in ours. So the opening lines:
'We bolted every door but even so,
We couldn’t catch our breath for very fear’
speak both to the original context but also to the fears around lockdown, the fear of ingress, the anxieties centred around breathing. This motif around breath and breathing is central to the Gospel account, for it is about receiving the Spirit ‘pneuma' the original Greek word means both ‘breath' and 'spirit’. The Sonnet divides into the traditional Octet and Sestet, with a ‘Volta’ or turn, a change of tone and direction between the two. So in the Octet we have the lament, the fear, indeed the panic of the present crisis, as well as that of the disciple in the locked room. Once more my phrases are chosen to resonate with both:
‘Each fleeting hope just deepens the despair,
The panic comes again, the gasping starts,
The drowning and the coming up for air’
And the Sestet begins the transformation, quite literally, a change of Atmosphere:
‘Then suddenly a different atmosphere,
A clarity of light, a strange release…'
The conclusion of the sonnet is intended to widen the application of the poem from that one upper room to the whole earth and to condense the overall theme of movement from breathlessness to breath, from despair to hope:
‘To bring this breathless earth a breath of Heaven’.”

Poet-Priest Malcolm Guite is Chaplain and Supernumerary Fellow of Girton College, Cambridge, and teaches at the Faculty of Divinity at the University of Cambridge. He lectures widely in England and North America on Theology and Literature and has published poetry, theology, and literary criticism and has worked as a librettist. His books include: Love, Remember (November 2017); Mariner, a spiritual biography of Samuel Taylor Coleridge (February 2017, paperback edition February 2018); Parable and Paradox (2016); The Singing Bowl (2013); Sounding the Seasons (2012); Theology and the Poetic Imagination (2010) and Faith Hope and Poetry (2006). Malcolm has edited two poetry anthologies for Lent and Advent: The Word in the Wilderness (2014) and Waiting on the Word (2015). Malcolm writes Poet’s Corner, a weekly column in the Church Times and an anthology of his column’s writings, In Every Corner Sing, was published in November 2019. After Prayer, Malcolm’s poetic response to George Herbert’s poem Prayer was published in October 2019.

Malcolm has a particular interest in the imagination as a truth-bearing faculty and continues to reflect deeply on how poetry can stimulate and re-awaken our prayer life. Malcolm enjoys sailing, walking, old books, live music, riding his Harley Davidson motorbike and all the varieties of the British countryside and weather. Malcolm is also part of the rock band Mystery Train, regularly performing gigs at Grantchester, Cambridge and other places around Cambridgeshire.

With a background in music for theater and film, I love collaboration and creation with the purpose of meaningful connection and imaginative storying-telling. To hear my music, please visit my website (https://www.joshrodriguezmusic.com/) and BandCamp (https://joshrodriguezmusic.bandcamp.com/music). SHORT BIO FROM WEBSITE: Known for his energetic rhythms, rich harmonic language, and striking colors, Josh Rodriguez continues to gain recognition as an emerging composer on a national and international scale. Born in Argentina and raised in Guatemala and Mexico, Rodriguez's musical imagination has been formed by the colors and cultures of his childhood. Rodriguez is composer-in-residence of the Corona Symphony Orchestra, and currently serves at the Collinsworth School of Music at California Baptist University as Assistant Professor of Music Theory and Composition. He regularly contributes articles to arts & culture blogs, and is on the Leadership Team for Deus-Ex-Musica.com an initiative that brings musicians, pastors, and non-musicians together for concerts and conversations about the intersection of faith and new music. Rodriguez earned his MM at the Cleveland Institute of Music and Ph.D in Composition at the University of California, Los Angeles.
View full profile

Paul Chihara
Jun 5, 2021
TO WHOM IT MAY CONCERN: I am writing to recommend to your special artistic consideration a young and brilliant composer named Josh Rodriguez, who studied with me at UCLA during his four years of study leading to his Doctorate. Josh impressed me then, as he still does today, with his talent, drive, originality, and musical initiative. His recent choral composition “DARKNESS IS MY ONLY FRIEND” is a stunning example of musical passion, modern sound textures, and very clear contemporary notation, all in a traditional world of faith and supplication. Josh has a wide variety of musical experiences (in composing concert, choral, and film music) which enriches his musical vision and vocabulary. And he is still growing! His musical curiosity, courage, and originality all make his latest music unpredictable and utterly amazing! He speaks to this generation of youth and older music afficienados like myself! Yours. Paul Chihara Distinguished Professor Emeritus, UCLA Artist Faculty in Film Scoring, New York University
Copyright © 2021 - Consortio, Inc. - St. Paul, MN